Fluorescent biological imaging is a very powerful and vastly improving tool in the detection and tracking of biomolecules. In fluorescent bioimaging, a nanoscale object (biomarker) is attached to the biological molecule of interest, and the fluorescent property of the biomarker enables the optical detection of biomolecules. The biosensing applications of biomarkers can be divided into two separate families: (i) in vitro, where the biological samples are studied outside their normal biological context and (ii) in vivo where the biomarkers are introduced into a living organisms (animals or humans). Generally QDs intended to be used in in vivo applications have to meet strict requirements, thus their research poses a greater technological challenge. QDs for in vivo biomarker applications should be <bib id="somogyi2014computational"/>: (i) non-toxic and bioinert, (ii) their hydrodynamical size should be sufficiently small for clearance (with diameter less than 5.5 nm), (iii) they should be photo-stable, so the signal remains stable under operation. Furthermore, it is highly desirable that (iv) they have intense, stable emission in the near-infrared range (700-1300 nm in wavelength) where there is a low-absorption window of cells, often referred as the near-infrared window. Fluorescent biomarkers are made from various different materials (organic molecules and several compound semiconductors), but currently there exists no such solution which fulfills all of the aforementioned criteria and thus can be considered as an ideal tool for biological imaging.

Our group is determined to find solutions to challenges faced on the designing and manufacturing of in vivo biomarkers. In order to achieve our goal, an experimental group is working on the problem alongside the computer simulation research.

Our research is focused on diamond and silicon carbide nanocrystals because they are biologically inert and can be produced with very small diameter. However, the fluorescent emission of diamond and silicon carbide nanoparticles are not suitable for biological imaging: they emit light in the UV-visible range instead of the NIR window. In order to make the optical properties of these nanocystals more favorable for biosensing applications, we are investigating the effects of different surface treatments and point defects on the fluorescence wavelength. 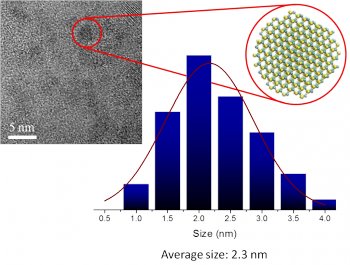 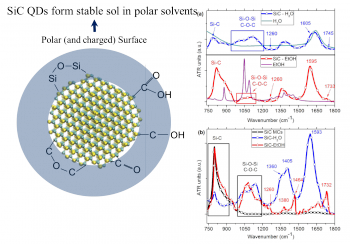 SiC nanocrystals are really complex systems. While the core of the crystal is crystalline SiC, the surface contains different organic and silico-organic groups. These groups are responsible of the extreme stability of SiC QDs in aqueous media even at high salt concentration, and they highly influence the optical and chemical properties of the NCs. For employing SiC as a biomarker, chemical and physical properties of the nanocrystals have to be well known and controllable. We are able to control the surface of NCs both during the preparation and with post process chemical treatment.

Our group members at Wigner ADMIL laboratory have succeeded manufacturing carbon antisite–vacancy colour centres in silcon carbide nanoparticles. In collaboration with Australian researchers we showed that these colour centres behave as single-photon emitters, and therefore may be used in the future in nanometrology and quantum informatics. The biocompatibiliy of SiC makes these defects ideal candidates for biosensing at the molecular level. According to our single advanced density functional theory calculations the photoluminescence can be associated with the double positive charge state of the carbon antisite-vacancy pair in 3C-SiC, in contrast to the previous assignment (Si-vacancy) <bib id="castelletto2014room"/>. 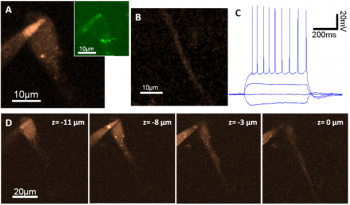 Two-photon imaging of a neuron labeled by SiC QDs. (A) Representative 2PLSM image of a CA1 hippocampal pyramidal neuron filled with SiC QDs. Red fluorescence signal (600-700 nm, red channel) was generated at 830 nm excitation. Inset, the same neuron, but fluorescent signal was collected from 425 nm to 525 nm (green channel). (B) Red channel image of the apical dendrite of the neuron. (C) Somatic membrane voltage responses of the neuron induced by somatic current injection steps do not show any changes. (D) 2PLSM images collected from different depths at 800 nm excitation.

We have demonstrated in collaboration with Balázs Rózsa group that our SiC QDs have a strong emission due to two-photon excitation <bib id="Beke2013_bio"/>. We detected fluorescence from SiC QDs injected to neuron cells by a two-photon microscope. Two-photon imaging was performed using a Femto 2D Two-Photon Laser Scanning Microscope (2PLSM) with an ultrafast Ti:Sapphire laser (Mai Tai) tuned from 740 nm to 850 nm. Optimal excitation wavelength for imaging in red channel (emission wavelengths between 600 and 700 nm) was around 830 nm. The excitation laser energy was ~60 mW before the objective. Whole cell patch-clamp recordings were made from CA1 pyramidal neurons in acute 300 µm mice hippocampal slices. Cells were filled with intracellular solution (ICs) and SiC QDs via the patch-pipette (6-9 MΩ). Images were taken at ~40 µm under the slice surface. In red channel the soma was clearly visible, whereas the signal contrast was relatively weak in the green channel (425-525 nm, Fig. A). As we expected from the bioinert property of SiC QDs, no sign of cellular damage of the pyramidal neurons was observable during the long (> 1 hour) measurement time. In addition, basic electrophysiological properties (action potential threshold, peak width and amplitude; membrane potential; firing rate) have not changed significantly during the measurement indicating the lack of cellular toxicity. This study implies that our SiC QDs may be good candidates as luminescent biomarkers for neuroscience.

We calculate the ground state properties of semiconductor nanocrystals utilizing the Density Functional Theory (DFT), while the optical properties are calculated via the time-dependent density functional theory (TDDFT). In case of very small nanocrystals, even calculations based on the GW approximation are carried out in the framework of many-body perturbation theory. With the help of computer simulations, we aim to find suitable candidates for in vivo biomarkers and to aid the experimental group in the interpretation of their results. 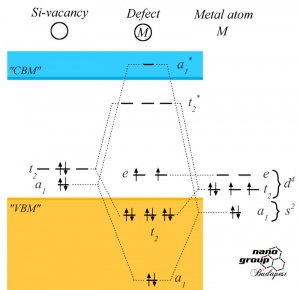 In bulk SiC there are several known point defects which create deep defect levels in the band gap and act as color centers. Introducing these defects into nanocrystalline SiC, the optical properties of the nanocrystals could be drastically altered resulting in near-infrared emitting biomarkers. We investigated silicon vacancy, divacancy and different transition metal (vanadium, molybdenum, tungsten) related point defects in small SiC nanocrystals. Our calculations verified that these defects lower the absorption edge and fluorescent emission energy of the nanocytals and also reduce the size-dependency of the optical properties due to the localized nature of the defect states. Since the optically active defect levels lie deep in the band gap, the shallower surface related defects levels are expected to have less influence on the emission energy compared to the pristine SiC nanocrystals. Although the introduction of the investigated defects in ultrasmall nanocrystals poses a major technological challenge today, larger (d > 45 nm) silicon nanocrystals containing vacancy defects were already successfully fabricated. <bib id="C2NR32442C"/><bib id="castelletto2014room"/> 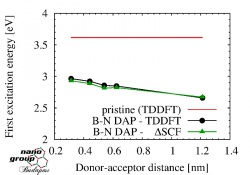 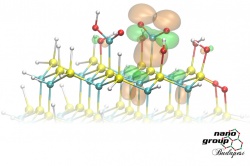 Due to the large surface to volume ratio of the SiC nanocrystals, the chemical structure of the surface has a large influence on their optical properties. Understanding the surface related phenomena of SiC nanocrystals is of great importance, but also a rather demanding task since the surface chemistry of these ultrasmall nanocrystals is not fully known and very difficult to determine experimentally. While it is generally accepted that the surface of SiC nanocystals in aqueous solutions is oxygenated, the chemical groups bonding to the surface are not well known. We have investigated the effect of oxygen atoms, hydroxyl, anhydrid, neutral and deprotonated carboxyl groups on the optical properties and vibrational spectra of the SiC nanocrystals. According to our atomistic simulations, the absorption edge of the small SiC nanocrystals are lowered in the presence of deprotonated carboxyl groups bonding to the surface. This explains the fact that the measured fluorescence of these nanocystals occurs at higher wavelengths compared to the calculated emission of nanocrystals with non-oxygenated surface. <bib id="voros2010absorption"/> <bib id="voros2010absorption_2"/> <bib id="szekrenyes2014chemical"/>

Diamondoids and nanodiamonds for biomarker applications

In a cooperation with partners in Russia and Germany, we have taken part in the work of predicting and validating the properties of silicon-vacancy colour centres in nanosized diamond particles. We have contributed with time-dependent DFT calculations, not has been carried out on such large systems so far. We showed that quantum confinement occurs for the valence "band" in nanodiamonds which affects the position of defect related levels in the gap via exchange-correlation effect. As a consequence, the silicon-vacancy luminescence should show a blue shift in ultrasmall nanodiamonds. Nanoparticles for validating experiments have been extracted from a meteorite sample, but production of similar artificial nanoparticles seems to be very prospective in e.g. biosensing. This article has been selected for review in Nature News and Views. <bib id="Vlasov2014" /> 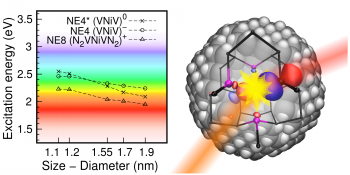 Fluorescent nanodiamonds constitute an outstanding alternative to semiconductor quantum dots and dye molecules for in-vivo biomarker applications. Their fluorescence comes from optically active point defects that work as colour centres within the nanodiamond. For practical purposes, these colour centres are required to be photostable as a function of laser power or as a function of the surface of the hosting nanodiamond. Moreover, they need to exhibit a sharp and nearly temperature-independent zero-phonon line. In this study, we show by hybrid density-functional-theory calculations that nickel doped nanodiamonds show the desired properties, opening thus the avenue to practical applications. In particular, we have calculated the lowest excitation energy of nickel-related defects in hydrogenated nanodiamonds both assuming a large concentration of nitrogen (NE8) and no nitrogen. We found that the excitation energy depends very significantly on the size of the nanodiamonds because the transition occurs between a heavily perturbed valence band like state which is subject to quantum confinement. We propose that multi-colour in vivo bioimaging agents can be fabricated with these single colour centres in molecule-sized nanodiamonds when the size of the nanodiamonds will be fine controlled. All of the considered colour centres are paramagnetic and this gives an additional freedom for using them as sensors embedded in nanodiamonds. <bib id="thiering2014" />