The idea of utilizing quantum systems to perform complicated quantum mechanical simulations and calculations was raised by Richard Feynman in 1982. This basic idea has initiated new directions in many disciplines and influenced different fields of nowadays physics. By now it has been widely accepted that quantum computation and information processing applications may possess extraordinary features and of great importance for future technologies.

Research groups at the very frontiers of physics are actively working on explaining the behavior and creating viable designs of the building blocks, such as quantum bits (qubits), quantum gates, etc. of would-be quantum computers. One of the most promising candidates for the realization of a qubit is the spin of a single point defect in semiconductors and insulators which can be considered as a good compromise compared to the solution of other contenders and has great technical advantages because of the large amount of accumulated experiences with materials processing. The extraordinary properties of defects such as the famous NV center in diamond allow optical control of the electron and nuclear spins. With applying static and radio and microwave electromagnetic fields to them, several quantum operations have been carried out by these systems so far.

Furthermore, thanks to the achieved ultimate control of electron spins, these point defects often can be utilized as nanoscale sensing tools. High sensitivity of their finely-tuned properties to environmental perturbations is the key feature behind this idea. This recent field of research and application is often called as nanometrology.

Our group actively contributes to the development of these new fields by first-principles and analytical characterization of well-established point defects and promising candidates thereof.

The nitrogen-vacancy (NV) center in diamond is a leading contender for realizing the solid state spin qubits concept in quantum information. Our group significantly contributed to the understanding of optical and magnetic properties of this defect, and is continuously investigating those as a function of external perturbations, temperature, surface effects or quantum confinement.

We analyzed the electronic structure and the hyperfine signals of the neutral NV defect in detail <bib id="PhysRevB.79.235210"/> and proposed a scheme to utilize it for quantum information processing. Later on we proposed a model on the dynamical charge switching between the neutral NV defect and the negatively charged NV defect upon strong laser illumination based on quantum mechanical calculations. To this end, we calculated the radiative lifetimes and non-radiative Auger-rates of NV center <bib id="PhysRevLett.106.157601"/>, <bib id="PhysRevLett.110.167402"/>.

The Stokes-shift in the photo-excitation of the NV center was accurately determined <bib id="gali2009"/>. The position and the nature of the singlet shelving states are still in active investigation by experimental and theoretical methods where we contributed to this field by group theory analysis <bib id="MazeGali2011"/> and calculating the excited states by a parameter-free many-body theory called GW+BSE <bib id="PhysRevB.81.041204"/>. We also calculated the adiabatic charge transition levels of NV defect that can be important in understanding the photo-ionization of NV center <bib id="Deak2014"/>. In addition, by calculating the formation energies of vacancy, nitrogen and related defects we concluded that vacancies created by implantation or other related techniques are contributing the most to the formation of NV centers, and the long-range diffusion of vacancies may not play a key role <bib id="Deak2014"/>. In addition, we found that divacancy may form in the process of NV formation that can pin the Fermi-level so the charge state of NV defects <bib id="Deak2014"/>.

Recently, we have started to study the effect of different perturbations on the critical defect's properties.

As the quantum-optics protocols of the nitrogen-vacancy (NV) center rely on its negative charge state in diamond, the control of the charge state of the NV center is a prerequisite to apply them in sensor applications where NV centers should be placed as close as possible to the surface of diamond for efficient sensing of the targeted nano-objects. Advanced technologies have made possible to implant NV centers <1 nm in depth from the surface <bib id="Okai2012"/> in a controlled fashion, and luminescent ultrasmall ∼5 nm nanodiamonds could be also fabricated <bib id="Bradac2010"/> where NV centers are naturally located very close to the nanodiamond surface. In this work, we showed by accurate quantum mechanical simulations that typical diamond surfaces possess image states with sub-bandgap energies which compromise the photo-stability of the NV centers placed within a few nm of the surface. This occurs due to the mixture of the NV-related gap states and the surface image states which is a novel and distinct process from the well established band bending effect. We find that certain types of hydrogen, oxygen and fluorine coverages of diamond surface may lead to blinking or bleaching due to the presence of acceptor surface states. We identify a combination of surface terminators that is perfect for NV-center based nanoscale sensing and this work has been published in Nano Letters <bib id="Moloud2014"/>.

We applied an ab initio theory of the zero-field splitting (ZFS) of the NV center as a function of external pressure and temperature including detailed analysis on the contributions of macroscopic and microscopic effects. We found that the pressure dependence is governed by the change in the distance between spins as a consequence of the global compression and the additional local structural relaxation. The local structural relaxation contributes to the change of ZFS with the same magnitude as the global compression. In the case of temperature dependence of ZFS, we investigated the effect of macroscopic thermal expansion as well as the consequent change of the microscopic equilibrium positions. We could conclude that theses effects are responsible for about 15% of the observed decrease of ZFS <bib id="PhysRevB.90.235205"/>.

In a cooperation with partners in Russia and Germany, we have taken part in the work <bib id="Vlasov2014" /> of predicting and validating the properties of silicon-vacancy colour centres in nanosized diamond particles. We have contributed with time-dependent DFT calculations, not carried out on such large systems so far. Nanoparticles for validating experiments have been extracted from a meteorite sample, but production of similar artificial nanoparticles seems to be very prospective in e.g. biosensing. This article has been selected for review<bib id="becher2014fluorescent" /> in Nature News and Views.

The extraordinary properties of NV-center in diamond exhibit great potential for the investigation of point defect based quantum information processing systems. However, from the application point of view the extreme hardness of diamond may cause difficulties in fabrication and can hinder the spreading of possible applications. Among the first, our group proposed the idea of considering silicon carbide (SiC) as a new target of research, which is a device friendly material but may host promising defects for quantum information processing. The idea of using SiC to host solid state quantum bits supported by the combination of quantum mechanical calculations and group theory analysis was first openly suggested by Adam Gali at International Conference of SiC and Related Materials 2009 (Nürnberg, Germany, 2009) <bib id="Gali10"/> where divacancy was the primary candidate <bib id="Gali10"/>, <bib id="Gali2011-TDDFT"/>. Later other candidates were also theoretically studied <bib id="Weber2010"/>. The first breakthrough has been achieved for the coherent manipulation of ensemble divacancy and related defect spins in 4H polytype of SiC by the Awschalom group <bib id="Koehl2011"/>.

Investigation of new candidates in SiC is a rapidly developing direction of nowadays research. In this respect, the most actively studied defects in SiC are the divacancy, the silicon vacancy, and the carbon antisite-vacancy pair.

The electron spins of semiconductor defects can have complex interactions with their host, particularly in polar materials like SiC where electrical and mechanical variables are intertwined. By combining pulsed spin resonance (David Awschalom group at Chicago University) with ab initio simulations, we show that spin-spin interactions in 4H−SiC neutral divacancies give rise to spin states with a strong Stark effect, sub-10−6 strain sensitivity, and highly spin-dependent photoluminescence with intensity contrasts of 15%–36%. These results establish SiC color centers as compelling systems for sensing nanoscale electric and strain fields.

In an international cooperation with Japanese and Australian colleagues, we supported the establishment and identification<bib id="castelletto2014silicon" /> of the carbon antisite–vacancy pair as a world-record bright single-photon emitter in silicon carbide with theoretical work and computational simulation. The results have been highlighted in Nature Physics<bib id="aharonovich2014optical" /> and Nature Photonics<bib id="boretti2014optical" />. Nature Materials 13 151-156 (2014) DOI:10.1038/nmat3806

Our group members at Wigner ADMIL laboratory have succeeded manufacturing carbon antisite–vacancy colour centres in silcon carbide nanoparticles. In collaboration with Australian researchers we showed that these colour centres behave as single-photon emitters, and therefore may be used in the future in nanometrology and quantum informatics. The biocompatibiliy of SiC makes these defects ideal candidates for biosensing at the molecular level. According to our single advanced density functional theory calculations the photoluminescence can be associated with the double positive charge state of the carbon antisite-vacancy pair in 3C-SiC, in contrast to the previous assignment (Si-vacancy) <bib id="castelletto2014room"/>.

Adam Gali has been shown by ab initio calculations that the negatively charged silicon vacancy (Si-vacancy) can be associated with the Tv2a and related photoluminescence centers with possessing S=3/2 spin <bib id="Gali2012-MSF"/>. It has been analyzed by the combination of quantum mechanical calculations and group theory how this defect can be utilized to realize qubits <bib id="Gali2012-TDDFT"/>. 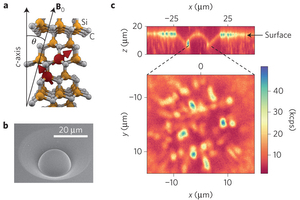 In collaboration with German (Jörg Wrachtrup group at Stuttgart University) and Swedish (Erik Janzén group at Linköping University) researchers, we report the characterization of photoluminescence and optical spin polarization from single silicon vacancies in ​SiC, and demonstrate that single spins can be addressed at room temperature. We show coherent control of a single defect spin and find long spin coherence times under ambient conditions. Our study provides evidence that ​SiC is a promising system for atomic-scale spintronics and quantum technology. Our study is highlighted in a News and Views article from Nature Materials.

A phosphorus (P) donor has been extensively studied in bulk Si to realize the concept of Kane quantum computers. In most cases the quantum bit was realized as an entanglement between the donor electron spin and the nonzero nuclei spin of the donor impurity mediated by the hyperfine coupling between them. The donor ionization energies and the spin–lattice relaxation time limited the temperatures to a few kelvin in these experiments. We demonstrated by means of ab initio density functional theory calculations that quantum confinement in thin Si nanowires (SiNWs) results in (i) larger excitation energies of donor impurity and (ii) a sensitive manipulation of the hyperfine coupling by external electric field. We proposed that these features may allow to realize the quantum bit (qubit) experiments at elevated temperatures with a strength of electric fields applicable in current field-effect transistor technology. We also showed that the strength of quantum confinement and the presence of strain induced by the surface termination may significantly affect the ground and excited states of the donors in thin SiNWs, possibly allowing an optical read-out of the electron spin <bib id="doi:10.1021/nl300816t"/>.